Tiger Trout Fishing Tips: All You Need To Know To Catch Them 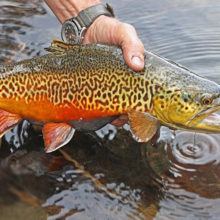 Known as a hybrid of trouts, Tiger Trout is considered one of many special types of fish that a fisherman can get his hands on. A Tiger trout is actually a combination of two species of trouts. They are also the aggressive type and that is why anglers and fishermen would take on the challenge of baiting one.

This article will discuss the tips and tricks you can use on fishing Tiger trouts. Additionally, we will also dive deep and discuss all you need to know about this powerful hybrid.

All You Need To Know About Tiger Trout

The Tiger Trout is known to be an anomaly of the wild since it is a cross that came from two types of trout from different genera. It is an inter genetic hybrid from a brown trout, known scientifically as Salmon Trutta and the brook trout which is scientifically known as Salvelinus Fontinallis.

This breed goes as far back as 1944. The unusual pairing of the brook trout and brown trout resulted in a trout that resembles stripes that of a tiger, thus it is referred to as the Tiger Trout. They have also been found to grow faster than any other natural species.

Tiger trouts are usually bred and raised in fish farms only to be released later on to help control the competition. This is also the reason why the Tiger Trout has become a go-to breed used for fish stocking programs.

The process of breeding Tiger Trouts happens through the fertilization of the eggs from the brown trout and the milt of the brook trout. It results in the Tiger trout having an excess number of chromosomes and an enhanced survival rate of about 85%.

This type of trout is considered a very piscivorous which means it feeds heavily on other fishes. The average weight can be around 2 to 5 pounds, however, there had been records of the largest being at around 20 pounds.

As the name suggests, Tiger Trouts are famously known for their tiger stripes. They usually appear grayish-brown in color with their body covered in a labyrinth-like pattern. They also typically have a bright colored belly often seen as a yellow and orange blend.

They carry a square tail fin and their pectoral and pelvic fin displays the same color as their belly. Meanwhile, their head will usually have a spotted pattern which is similar to that of the brown trout.

The females will usually have a light brown and tan shade with less of the orange and yellow tones.

Where Can You Usually Find Them?

Tiger Trout don’t naturally appear in waters, and they are actually released into lakes after they are bred and raised in fish farms. The places with abundant Tiger Trout population include Utah, Colorado, Wyoming, Indiana, Minnesota, Ohio, Nevada and Saskatchewan, Canada to name a few.

Often times, they thrive in cold waters and big lakes. However, there is also a huge population that can be found in moving waters. Tiger Trouts are agile fishes and can easily swim against the current. Additionally, they are also found in waters where there are tons of small fishes.

What Do They Eat?

This powerful hybrid also has a very huge appetite. To keep up with their strength, they generally are feeders of other smaller fishes. Being piscivorous makes them the ideal weapon in controlling fish population.

Aside from small fishes, they also have an appetite for invertebrates, insects, and larvae. Additionally, they also feed on nymphs, trout dries, and streamers on other occasions.

One of the notable characteristics of a Tiger Trout is its strength. Most fishes save the nutrients they get from feeding for the purpose of reproduction. However, this is not the case for the Tiger Trout.

Since they do not reproduce and reproduction is not on their primary purpose, most of the nutrients they consume is used for growth. This is mainly the reason why this breed possesses great strength and can put up a fight when caught.

How To Catch Tiger Trout?

Tiger Trout are mysterious and can put up a fight when caught. This is the reason why anglers and fishermen consider it a priced catch. Among the most effective ways, there is bait casting and fly fishing.

Baitcasting is one of the methods of fishing that you can explore and use to catch Tiger Trouts. This method relies on the lure’s weight to extend the fishing line to the target. Follow these steps to guide you on how to properly do bait casting.

To have a more constructive idea on how this is done, watch this video:

Another method that you can opt to use is fly fishing. This method is commonly used to land monster sized trouts like the Tiger Trout. Here are the steps that you can follow on how to fly fish for Tiger Trouts.

Now that you have in-depth knowledge about the Tiger Trout including the effective way of fishing for it, we are throwing in some bonus tips on Tiger Trout fishing.

During this period, you need to be very patient as the Tiger Trout would typically cruise in schools every now and then along the shoreline. The baits that are best to use during ice off fishing are Nightcrawlers and PowerBaits.

Combine this with using a large sinker and let your bait sink to the bottom. For flies and lures, the ideal one to use is something that looks like a leech. Opt for tube jigs and grubs that have a dark color.

To make it even more effective, you can try to coat it with Smelly Jelly or another scent that can attract a Tiger Trout. You can also place a Nightcrawler on the lure’s hook, especially if you are using a plastic lure.

There is a tendency that the Tiger Trout will strike the lure again if there is a scent to it. This will eventually give you more chance of definitely hooking a Tiger Trout.

In summary, Tiger Trouts are one of the most sought after fishes that anglers and fishermen are usually after. This special breed of trout is a genius combination that results from crossing a brown trout and a brook trout.

It is also often used for fish stocking programs and for sports fishing. There are several ways and techniques that you can use to fish for Tiger Trouts. Consequently, you can also learn and master the tips that we have discussed in this article.

With an in-depth knowledge about Tiger Trouts and understanding of these methods and techniques, you are now ready for a fishing expedition, unlike what you may have had before.